Experience the plant and animal world of artist Chris Lebeau
From peacocks to ibis, from dandelion to maple tree: at the exhibition ‘Chris Lebeau I Flora and Fauna’ you experience the plant and animal world as decorative artist Chris Lebeau (1878-1945) created it with such great care for detail. With nature as his source of inspiration, he designed beautiful and innovative patterns for textiles in the art nouveau style. He knows how to catch a large variety of natural motives in stunningly styled designs for damask, batik, and velours. Even today, they are true eye-catchers. The versatility of Lebeau as a ‘textile artist’ is the focal point of the exhibition. Historic sample books are presented in order to illustrate how the designer learned how to stylise natural motives and translate them into ornament prints. The exhibition can be seen in the DamaskWeaving workshop. 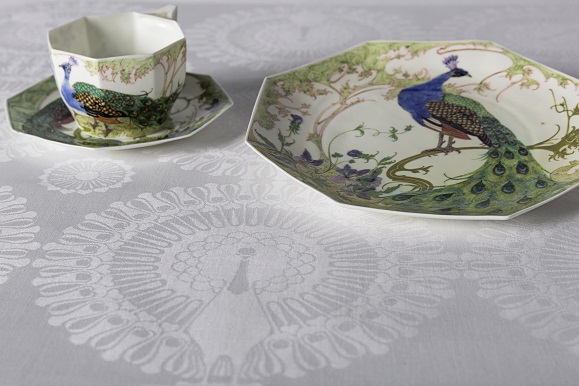 ‘Experience the plant and animal world of artist Chris Lebeau’

Nature as a source of inspiration
At the start of the twentieth century, nature is the most important source of inspiration for decorative and industrial design artists in the Netherlands. Dissatisfaction with the inferior quality of industrially manufactured products is the cause for innovation within the professional area on an international scale.

Historic (neo-)styles and the drawing according to models and sample books are replaced by the designing of ornamental prints: patterns are simplified to an interplay of lines. The internationally used style that arises from this is called Art Nouveau or Jugendstil.

This also alters the course in the artistic and industrial schooling. In 1904, after having finished his training in Amsterdam, Chris Lebeau moves to Haarlem to teach at the Kunstnijverheidsschool (School for Applied Arts). He takes his students on trips into the dunes and visits to Artis Zoo. The ‘drawing of nature’ is becoming more and more common at the art schools. The actual plant is studied from different angles; the chosen flower or leaves are caught in a corresponding geometric shape and styled as ornamental prints. 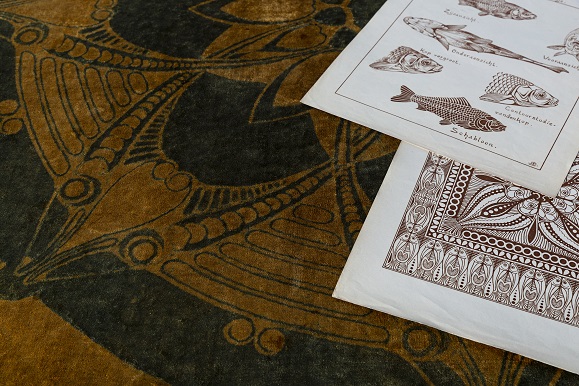 According to a system
Contrary to the sweeping and graceful Art Nouveau style which was popular with our Belgian neighbours, a more sober style was being developed in the Netherlands. Characteristic features are the geometrical divisions and clean structure. The foundation for the designs can be found in mathematical design methods. This method of designing is called ‘according to a system’. To make his designs, Lebeau usually first draws a grid. Then he creates his styled flora and fauna patterns using the grid. For his damask tablecloths, serviettes, and napkins, he rearranges the basic shapes, adjusted to the size of the product.

Collaborations
Lebeau’s techniques and drawings become very popular with textile companies such as linen manufacturer Van Dissel and velours manufacturers Schellens & Marto and Léo Schellens, all located in Eindhoven. The shiny velours upholstery fabrics are printed with his flower and animal patterns.

The collaboration with Van Dissel results in nearly 60 designs for table damask, which were produced over a period of nearly four decades. He also masters the process of making batiks, a technique in which he produces a large number of works.

DamaskWeaving workshop
This area contains authentic 19th century Jacquard looms that were used to weave damask. A film from 1935 demonstrates how this was done at the linen factories of NV Linnenfabriek van Dissel & Zonen, in Eindhoven. You will even see Chris Lebeau himself, working on one of his last designs, called ‘Cyclamen’. In the workshop, there will also be old and new damasks fluttering about as they are hanging here to dry after a thorough washing. At the TextileLaundry, you can have your table linen washed and pressed in a professional way.

From the TextielShop
In 2016, the museum’s own label by TextielMuseum commissioned Iris Toonen and Elske van Heeswijk of Studio Prelude to reinterpret the classic linen design ‘Visschen’ (no. 561) by decorative artist Chris Lebeau (1878 – 1945) and to create a design with new colours and materials. They researched the different links within the design, which allowed them to rediscover the Art Nouveau pattern. The result can be seen in the beautiful, contemporary products that truly echo the past. The table linen is available in the TextielShop at the museum and online via by.textielmuseum.nl.